On another part of the building is Shakespeare’s life-size bust which appears to be gazing down on the busy street below. Close examination of the bust will show one of the poet’s hands is missing. This was lost during World War 1 when a bomb dropped nearby!
The Shakespeare’s Head which was built in 1735 was originally owned by Thomas and John Shakespeare, distant relatives of the poet. The pub overlooks Carnaby street, once the site of an 18th century street market and now one of the world’s most famous shopping precincts. Dominating its northern end is the pub’s inn sign which is a reproduction of Martin Droeshout’s portrait of Shakespeare when the poet was at the pinnacle of his genius. 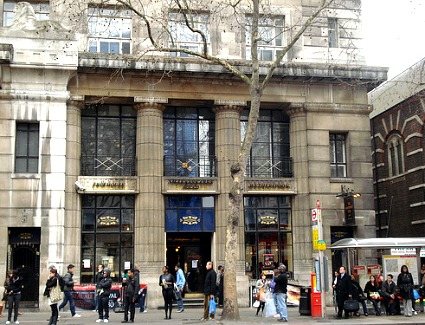 It’s prone to get busy, even though it’s massive, and full of parties and tourists. So why are we recommending it? Its position next to a major tube station, in the centre of town, on a busy stretch of road in a very rich area means that the clientele are almost always transitory; you’ll rarely see the same people in there twice. This is great for meeting people, as everyone’s there to have fun, but moreover, the place is very large and can easily accommodate large numbers of guests. If you’re part of a large group, many pubs turn out to be too small to comfortably seat you; but not this one. A good starting point for a night out in the area.
The Shakespeares Head address
Africa House
64-68 Kingsway
Holborn
London
WC2B 6BG
The Shakespeares Head telephone number: 020 7404 8846