Back in Gibraltar for another year the performances have included a series of workshops as well as the performances. On Friday the players performed to pupils in St Anne’s Middle School. The visit formed part of this year’s Spring Festival programme supported by the John Mackintosh Hall Trust and the Parasol Foundation.
Over 100,000 young people see these shows specially produced for young people every year with the Young Shakespeare Company providing a year-round programme of workshops, performances, residencies and INSET courses as well as working in schools, theatres and professional development centres internationally and throughout the UK. Productions directed for the Young Shakespeare Company also include: Macbeth, A Midsummer Night’s Dream, Hamlet and Twelfth Night, some of which have been presented on previous visits.

We were delighted to welcome the Young Shakespeare Company back to the school to work with the whole of Year 7. Students took part in a series of creative and engaging workshops in the morning where they analysed Shakespeare’s use of language, learnt lines and took on some of the parts to ‘Macbeth’.
In the afternoon, they then had the opportunity to watch a highly engaging, modern twist on the Scottish play. The performance was incredibly entertaining with the actors racing around the audience for fight scenes. The students also had the chance at the end to ask the actors a range of questions on the play itself, their own acting experience and the choices the Company made for their production – including the decision to cast Macbeth with a female actor.

They were truly enamoured by the production, and very happily joined in as the ‘lovers’, the ‘mechanicals’, the ‘royal’ cast, the magical forest, and even a wall! The children found Puck highly entertaining; his ‘DJ’ skills, cheeky nature and gymnastic abilities particularly impressing them. Some feedback from two Year 4 critics:
Year 4 had a wonderful morning experiencing the magic and confusion of ‘A Midsummer Night’s Dream’, performed by the Young Shakespeare Company and some of our very own Year 4 actors!

The Year 11 students had the opportunity to be part of a Macbeth performance led by the Young Shakespeare Company on Thursday 2nd May. Not only did the performance provide great entertainment value with swords, blood, drama and intrigue but it enabled the students to grasp the tough Shakespearean dialect. The actors expertly deciphered some of the plays crucial scenes in meaningful ways to aid the revision process in preparation for the looming GCSE exam.
The students participation in the production was excellent whilst the level of engagement was of the highest order. We hope that this now gives the students an extra edge in performing well in the exam.

We appreciate your feedback and helping us to improve Spotlight.com
Professional actors and storytellers perform Shakespeare’s plays for young people in schools and theatres across the country.

The girls were involved in helping to set the scene, taking on lead roles and making predictions as to what happens next! They particularly enjoyed being part of the battle scene at the end of the play and crowning King Malcolm.
On Wednesday 10 October, we were delighted to welcome six actors from the Young Shakespeare Company to the Prep School. They put on an interactive performance of Shakespeare’s Macbeth for Years 3-6. 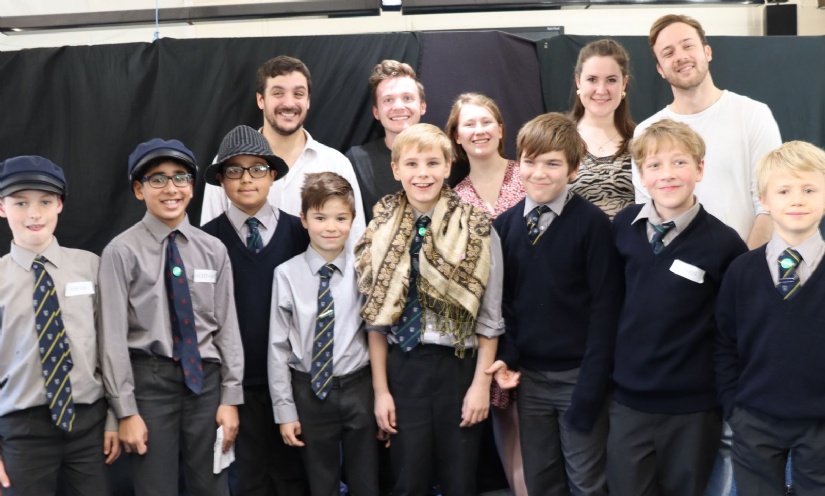 This was no ordinary production as the children were all able to join in by making sound effects, supplying ingredients for the witches’ cauldron, becoming guests at Macbeth’s banquet and miming chopping down Birnam Wood. With the help a narrator the audience were encouraged to speculate on what might happen next and recap on parts of the story. Of course any play which involves witches, ghosts and a fair bit of fighting will grip most 9 year olds but this production proved to be the ideal introduction to the works of Shakespeare as pupils and staff sat mesmerised throughout.
Established in 1988, The Young Shakespeare Company is a leading touring educational theatre company which specialises in making the works of Shakespeare both entertaining and accessible to school children up and down the country.